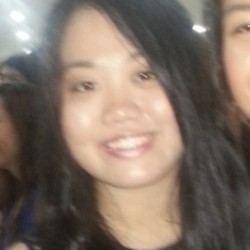 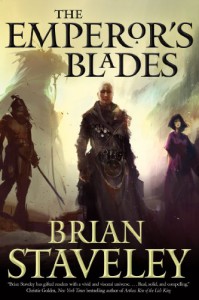 US/Canada people! Good news! The Social Potato is giving away THREE finished copies of The Emperor's Blades on the blog. Get over there and fill it up for a chance to win this awesome baby!

Reading Blood Song by Anthony Ryan introduced me to the world of high fantasy literature, where we are given new worlds with cultures and societies of their own which are oftentimes accompanied by magic and warfare. I enjoyed reading that book so much that I vowed to myself to read more from this genre, as I have developed an unsatiable thirst for similar themes. I've tried many, and although I've stumbled upon a lot of gems, not a lot of them measured up to the mark.

Of course, that was before I read The Emperor's Blades.

Not that I am going to compare the two. Blood Song and The Emperor's Blades are highly different from each other, but both made me feel emotions that I notice I rarely get from books now - excitement, anxiousness, trepidation - for fictional characters characters that feel utterly real. Both books have what many others lack - a moving, intricate storyline, complex characterization, beautiful prose and writing, awesome delivery, balanced pacing, among many others.

The Emperor's Blades is told from three point-of-views: Valyn, the youngest, who is undergoing training to be a part of the Kettral, a super elite group of people who use gigantic birds to do their missions; Adare, the only girl among the siblings, who stayed with her father to oversee the politics and other what-have-you in the palace; and we have Kaden, the oldest of the three, his father's successor, currently isolated from the world and training with the monks. Usually, I'm not very keen on reading from more than one perspective, but the characters in this book became so alive and dynamic that I've come to look forward to each and everyone of them. You know that feeling where the characters are just so well-written that despite their not being real, you see them like lifelong friends? That's what happened to me here. I loved Valyn and Kaden and could feel their anxiety and fear of the future seeping from the pages. Be it running away from creatures of dark caves, or enduring hard and long lashes from a seemingly strict and discipline-minded monk, I felt for them every step of the way. Deep in my heart, I wanted them to succeed every challenge that life would throw their way, wanted them to grow and get stronger and better to show their detractors who are the bosses.

While Adare was not given enough screen time, I found her a strong female character - independent with a bit of a rebellious side, intelligent and cautious, although she would sometimes be carried away by her emotions. I honestly found her a breath of fresh air, especially since in this genre, many women are depicted as weak, damsels in distress, or prostitutes. That's why it made me really happy to see an intellectual woman in a harsh world who can ward off greedy and shady politicans and ministers by wit alone. Hopefully in the succeeding books, we will see more of her and what her role is in the grander scheme of things.

As for the plot?

...it's amazing. Honestly, I don't even have enough words for it as I know it is just huge. The first book alone only gave us the tip of the iceberg, more of a laying out of the bigger picture, and I was already blown away. There is a lot of court intrigue, betrayals, evil people lurking in the shadows, and creatures dangerous beyond your wildest dreams... and I'm not even sure that encompasses all of it. Everything is written intricately, like there's significance even in the littlest and simplest of details. There's so much to know and explore, so much depth and richness to unfold, that I am shivering in anticipation.

I want to talk about it, but I can't. I want you all to experience the intricacies of this novel yourselves. When you have, come back here and let's discuss in the comments ;-)

Overall, The Emperor's Blades is a very cool book, an awesome fantasy novel that fans of the genre should get their hands on as soon as it's out. Trust me, you'd want to pick this up. This book = epic happiness.